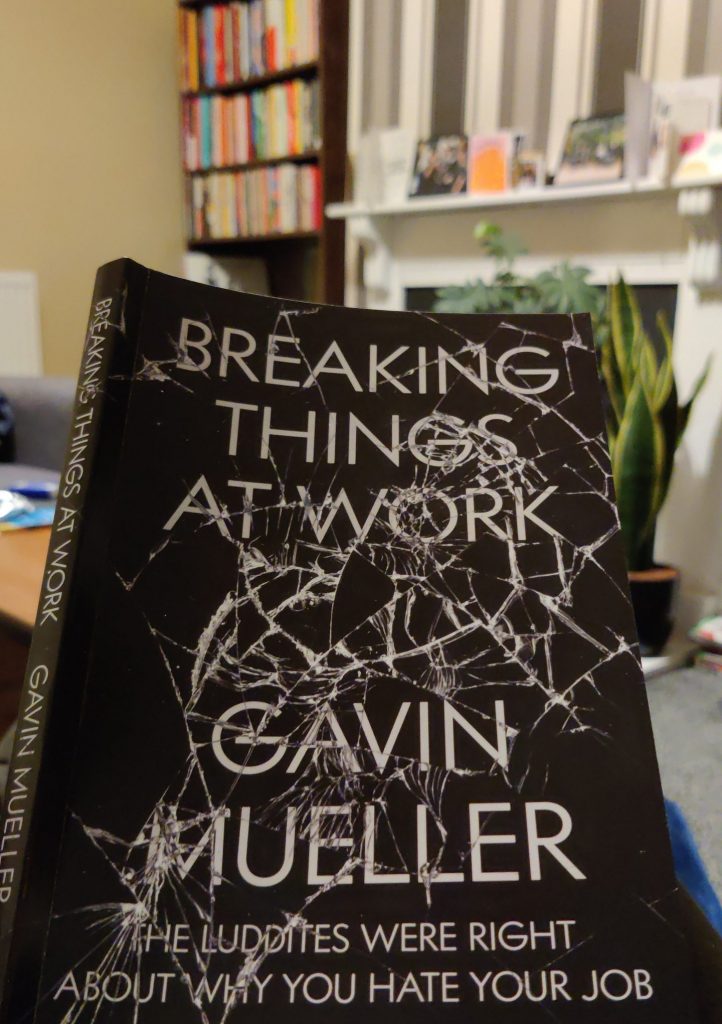 I’ve recently been reading Gavin Mueller’s Breaking Things at Work, a short but ambitious book that begins with a recap of the history of the Luddite movement and then uses this as a base from which to launch into a genealogy of luddite tendencies, tensions and tactics that can be found weaved into the history of labour struggle. Mueller is explicit about wanting to provide an antidote to the often poorly thought out Fully Automated Luxury Communism genre of thought that has been fashionable in recent years. I’m not convinced that it entirely achieves this, perhaps instead reaching the slightly lower bar of a refreshing palette cleanser after endless courses of FALC, but I found plenty of value in it nonetheless.

I particularly enjoyed the chapter on Taylorism in which Mueller includes a 1913 quote from a New Jersey silk mill worker which made me cackle:

“I never heard of this thing called sabotage before MR. Boyd spoke about it on the platform. I know once in a while when I want a half-day off and they won’t give it to me I slip the belt off the machine so it won’t run and I get my half day. I don’t know whether you call that sabotage, but that’s what I do.”

This is from Elizabeth Gurley Flynn’s Sabotage: The Conscious Withdrawal of the Workers’ Industrial Efficiency, published in 1917 when sabotage was being discussed as a new tactic of labour militancy, in which she argues that in reality workers already regularly practiced sabotage but without referring to it as such. Sabotage for Flynn is any withdrawal of efficiency by the worker and this is definition helped me see the value of experimenting with a Luddite lens when thinking about the terrain of labour struggle. Flynn also offers the below quote from another worker:

A key theme of the history Mueller lays out is the conflict between the astute analysis of rank and file workers who often rightly recognised that automation is not simply a means to achieve greater productivity but a process by which control over the production process can be snatched from them, and union leaderships who ignored this understanding and embraced automation as a utopian vision. These leaderships then often limited their agitation and demands to matters of wages etc even as new technologies made work itself an increasingly miserable affair.

Reading about this trend aligned nicely with thoughts left in my head from my (incomplete) reading of Mike Davis’ Prisoners of the American Dream last year in which Davis provides a painstakingly detailed account of the US labour movement whilst attempting to answer the question of, essentially, ‘why didn’t it follow Europe’s path?’. One of his central observations for me was that American workers in the in the 19th and 20th centuries experienced a particularly intense kind of humiliating tyranny at the hands of supervisors in their places of work that their European counterparts largely didn’t share. It was for this reason that whilst European militancy was more likely to focus on the ‘hard’, quantifiable demands about the outcome of work – wages, sick pay, holiday pay etc – first in the sights of American militancy was often ‘soft’ demands, about the nature of work  – protection from abuse (verbal or physical) at the hands of the factory foreman, limits on work that was excessively miserable to perform and the right to be treated with minimum standards of respect.

I hadn’t previously given much thought to how control over one’s work (the pace, the methods used, the ways in which you cooperate with your fellow workers) is something to be valued in and of itself even within the confines of the wage relation’s generalised alienation. It now seems obvious to me however that American workers, historically having been the first to experience Taylorism and the ways in which it systematically stripped this control from them, would have been more inclined to make demands about the nature of their work rather than simply their remuneration for it. It occurs to me that if the relentless pace of life’s reassembly at the hands of technology in the present is to be greeted by any meaningful response from the left, it must be a response that reasserts the right of workers to have a measure of control over their work.

Elsewhere, as the book approached the present, there was an obligatory mention of supermarket self-service checkouts as a familiar and transparent example of automation. I found it slightly distasteful that this was exclusively approached from the angle of customers who objected to the work of scanning items having been outsourced to them, rather than any exploration of what it meant to work in a supermarket alongside these machines. This perspective was stitched into a theme that presented automating technologies as forcing you to perform someone else’s job – citing an interviewed software developer who asked “Why am I doing HR’s job?” in response to having to log his own absence on a digital HR system. This struck me as on the wrong side of the debate that plays out regularly wherever David Graeber’s Bullshit Jobs is cited – do you object to having to do the work because you think it shouldn’t have to be done, or because you think it just shouldn’t have to be done by you?

To return to the self-service checkout for a second, every time I see them lazily deployed as an example of technological progress within whatever view I’m amused by the implication that they emerged as a sudden and isolated change in the nature of retail work that popped into existence out of nowhere in the late noughties. Anyone with any familiarity with the history of retail knows that technology has long been persistently restructuring the nature of work within it, albeit often out of view of the customer. That the advent of electronic point of sale systems features so rarely in popular writing on automation says a lot in my view about the backgrounds of those doing this writing.

Back to Breaking Things at Work – though it’s difficult throughout the core of the book to keep track of what argument exactly Mueller is making about Luddism’s value to the reader in the present, in the conclusion he asserts that the left should put forth a decelerationist politics – one committed to slowing the pace of change and undermining capitalist technological progress – based on an understanding that technology is at all times political rather than neutral. This politics would value the Luddism and its tactics as an emergency brake, in Walter Benjamin’s sense, a sorely needed obstacle to the reconfiguration of our lives by the bulldozer of capitalist technological progress.

I’ve a lot of time for this argument, although so far remain a way short of convinced by it, and so I was disappointed that the book didn’t offer much on the topic of what an energised Luddite movement in the most common workplaces of the global north in the 21st century might look like. Discussion of the present was confined to only the second half of the ‘High-Tech Luddism’ chapter and apart from the few pages concerned with the idea of doing someone else’s job was largely focussed on examples of resistance in Silicon Valley or the most obvious examples of resistance to Silicon Valley technologies in our own lives, e.g. boycotts of social media platforms.

As someone who often experiences their day-to-day work as a loop in which I develop my own technological solutions to automate the work required to maintain previous automation (or fauxtomation), I was desperate for something to help me structure my thoughts about being an active participant in, nay contributor to, capitalist technology’s dominating effect on my life. I suspect this sense of being both the automated and the automater is one shared by many workers in the 21st century’s economy, unlike the workers of the 20th century’s economy who were more likely to simply be on the receiving end of an automation done to them, and so it was a shame that the book did little to explore this dynamic.

Nonetheless Mueller manages to fit a whirlwind tour of Luddism’s history, its position within core Marxist debates and its continued relevance in the here and now in a little under 150 pages, without doubt a serious accomplishment.